We like to keep an eye on our primary regulators and what they are up to. A useful starting point is just to examine regulators activity, as measured by their output of documents in scope of our monitoring. 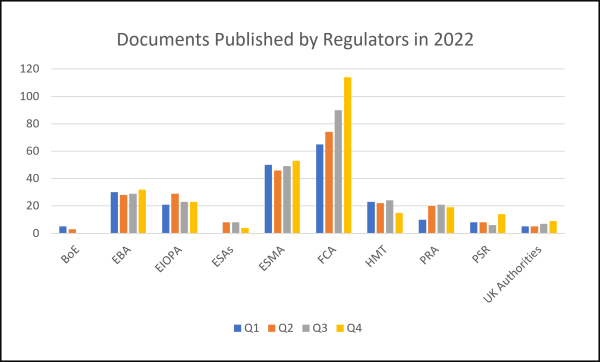 Regulators like the PRA, EBA, EIOPA, ESMA and PSR normally tick along at about the same level of activity from quarter to quarter.

Over recent years, the FCA has set a trend of issuing less Consultations than was historically the case and simply issuing Guidance instead, i.e. “we are not asking your opinion because we already know what we think.”  This trend continued in the last quarter with just 3 genuine Consultations issued compared to 13 Guidance papers, not to mention the additional guidance the FCA offers via tools such as 'Dear CEO' letters (which it is now issuing at an enhanced rate).

Many regulated firms will think that this reflects what they have experienced in terms of FCA increasing their intrusiveness and approach to supervision through the year.

Enforcement in Q3 2022 was a bit slow, if measured in fines and other public action taken. Just £29m levied in fines by the FCA.

However, they have more than made up for it in Q4 with a number of eye-catching interventions.

The aggregate level of fines was £157m from the FCA alone – a 500% increase on Q3 and I suspect one of the FCA’s most “productive” quarters ever.

Santander led the way with a staggering £107m fine for repeated AML failings and the notable trends continues to be AML failings (and small, overseas banks ongoing challenges with AML just seem to continue).

Other noteworthy fines include market abuse failings and further progress on a Barclays fine for corruption in its capital raising process during the credit crunch 14 years ago! All retail firms should take note of the £2.4m fine received by Pembrokeshire Mortgage Centre (now in liquidation) for poor advice in relation to British Steel pensions. TSB’s £47m fine (two fines actually – one each from FCA and PRA) for IT failings should not go unmentioned, notwithstanding the £33m of redress it paid customers.

My observation is that raised levels of enforcement in 2022 simply reflects the FCA’s more intrusive approach to Supervision.

I’ve failed to mention any non-FCA regulator, but in fact the ICO is also active. It is just pursuing a more collaborative approach in some enforcement situations, an interesting dynamic. Read more about this here.

Looking internationally, Coinbase’s $100m settlement with the New York Financial regulator (for AML failings, of course) should not go unmentioned. Coinbase being a Cryptocurrency exchange and just part of the wider issues in the Cryptocurrency world. Read more about this here.

And all that leads us to Supervision.

Nikhil Rathi, CEO of the FCA, promised the FCA would be much more intrusive, and he has been true to his word: 'Dear CEO' letters have rained down on the industry; the FCA increasingly uses attestations as part of its supervision strategy: from signing off on the existence of a Consumer Duty plan to confirmation by insurance companies that their pricing practices are compliant and the FCA’s expectations of all firms in supporting consumers through the cost-of-living crisis have, unsurprisingly, been made very clear.

While there are numerous ongoing FCA interventions, particularly of note is the threat to the traditional Appointed Representative model, which allows (normally) small firms to be unregulated, operating under another firm’s “umbrella”. After many years of threatening action in this area, some is finally being taken, in response to the Greensill scandal. The impact of this will be to reduce the number of Appointed Representative platforms, with those that remain becoming pickier about whom they accept on their platform. The knock-on impact of that is making it more difficult for new firms to get into business. More will be announced about all of this as the FCA completes its investigation.

Overall, the FCA’s promised intrusive approach is coming through and levels of compliance need to be sky high in any high risk or consumer facing sector or firms are at risk of serious intrusion by the FCA.

(And I won’t mention the new firm authorisation process. This has become very difficult in certain sectors; again, as promised by Mr Rathi.)

Despite the FCA’s high levels of activity, the most notable aspect of regulation over the last few months has been the level of political intervention.

What is highly predictable is that a new government promises a bonfire of red tape.

What is a lot less predictable is that they have come up with a bundle of reforms that might make sense and take us forward.  The Edinburgh reforms, overall, appear to be very sensible.  (I would be interested to know if anyone disagrees?).

I am interested to see the proposed changes to the SMCR. To date they have been muted but not detailed. My perception is that SMCR has been a success in driving better conduct within the industry through enhanced accountability. I read in the FT that SMCR was a failure because there had not been an increase in enforcement. I would have thought that was a measure of success? I could sympathise with any firm thinking “why did we go through all that pain and cost to implement SMCR if they then change it so soon after.”  Let’s see what the concrete proposals bring when they arrive.

There is also an ongoing “circular reference”, between political ambition and regulatory reality.

What is clear is that there is a drive from politicians to ease regulation… which flies in the face of what is actually happening at the FCA.

What is actually happening at the FCA is a tightening of regulation, brought on by the Gloster report which was… commissioned by politicians.

It’s a circular reference we have seen many times.

At the same time, there is a nonsensical (as I see it) proposal to somehow increase accountability to the FCA for regulatory failures. We already have numerous checks and balances in the system (i.e. the FSCS) and increasing accountability at the FCA will only further tighten their risk appetite and increase their level of aggression against firms, raising the cost of compliance, making us less competitive as a country and weakening our financial services sector.

I don’t get it. I have previously written 'They are looking in the wrong place' about how the cost of failures outside the regulatory system dwarves those within it and how (in my view) the authorities are not prioritising effectively.